“Blackhearts“ is a board game about a group of people on a pirate ship. In each round, players are offered with 8 characters and they have to lead the pirate ship back to the town with treasure. However, at the same time, this game involves within-group competition that at the end of the game, whoever has the most treasure wins the game.

I created this game from design, rule book, to all the crafts. All the drawings are from Google search or from other artists’ website.

This was a game I created as part of my Game Design Class taught by Stone Librande. I really like the types of board games that you can explore maps or discover uncharted places, and gameplay with character’s given abilities, such as Citadels, DungeonQuest, Zombicide... etc.

When I played DungeonQuest, I got really excited about drawing the tiles, because you never know what you will get. Once you see the tile, you have to decide where you want to place it on the map, which also determines the time of reaching out the center of the Dungeon. Citadels is a game about playing around character’s power, which is highly well-balanced among all the characters. I am really into this part of the game and want to work on a similar game. So in the brainstorm stage, I tried to combine these two elements together.

In this personal board project, I’ve done:

Game Board & Sets of Tiles:
The way I designed the exploration of the map is by using many hexagon tiles that players can place side by side. Why didn’t I use square tile? One square only connects with 4 tiles. Diagonal direction takes two movements to reach. However, hexagon tiles don’t have this issue. as it only costs one movement no matter what direction you move to. It makes the game fair for everyone.

First prototype. Player draws one piece of hexagon and places adjacent to another on the table. This pace of game was really slow. We’ve played more than 10 rounds, the map was still small. The map did not look like an ocean, but more like players were sailing in a river.

To adjust, I assembled several pieces of hexagon tiles with the printing of islands and ocean graphics on them. Players draw the tiles from the bag, unfold and place them on the table. This sped up the pace of the game and also players felt really interested in the growth.

For the final product, I made a board that had the middle part cut out. In previous playtests, players placed the tiles randomly. At the end of the game, the shape of the ocean always looked really unique but made it tough for players. If the shape is wide, players will spend a lot of time moving ship from one side to the other side. During those rounds, players were losing their interest and moved the ship without thinking.

Character Cards:
Character design is a big part of this game. Firstly, the background story is about the pirate ship. The characters should be related to this theme, just as the design for Citadels. When I designed the abilities, I firstly considered who the character is, then what this character is doing on the ship, and what the relationship with this theme is. For example, I designed a character as a Slave, which is really interesting. This Slave tries to escape, therefore I gave him the ability to damage the ship. If the ship takes three damages, then the ship must stop until it gets fixed. In the first playtest, players felt this character is really hilarious. Someone just kept picking this character and damaging the ship. However, the ability of Slave was too negative and anti-goal, therefore it makes the pace very slow. 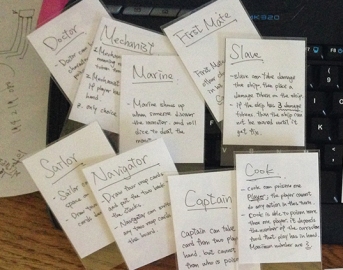 As the ability of Slave won’t benefit the players, and since there are already 8 characters in the game, I removed the Slave character in the later version. In the first version, the Captain is overpowered. I spent a lot of time refining all the abilities and balancing them. Every ability has to relate to the board and other characters in the game. They should not have one ability that is without influence. To engage players with the theme and the game, I used artwork to represent the characters rather than using a blank card with text.

Exploration Cards:
These cards are similar to those cards from Monopoly that either gift players coins, or create subgoals in the game, such as some specific items that player needs to collect.